For Jews the meaning of kosher is somehow always debatable – although some will say, it is not. The word ‘kosher’ refers to Leviticus, The Third Book of Moses 11, and is an expression for ‘allowed’ or in this context – ‘it’s okay to eat’.

There is no explanation in the Bible for why Jews should observe a kosher kitchen regime. However conclusions on what and how to approach are based on rabbinical interpretations.

In short the principle of kosher is

Yes, you can eat:

● All vegetables, flours and nuts. They are kosher and pareve (neutral) regardless of whether they are fresh/raw, frozen, canned or pickled in water or brine

● Only mammals that both have cloven hooves and chew the cud can be eaten (cow, lamb, goats, stag, deer and doe)

● Birds like chicken, duck, pheasant, dove, geese and turkey. No prey or scavenging birds. Ostrich is not kosher either

● Giblets from authorized poultry and birds are allowed food

● Cod roe and caviar from salmon are permitted foods

● Eggs from kosher birds. (Eggs with a blood spot shall however be discharged). Eggs are pareve (neutral)

● Wine should be produced under specific Jewish supervision, and actually the same goes for bread and cheese

● Vinegar made by kosher wine/grapes.

No, not a good idea (at least if you want to follow the kosher rules)

● Animals that chew cud, but do not have split hooves (horses, donkeys, camels, rabbits, hares and others.) are prohibited. Pork is a no go

● Wild animals in the wild that are killed in hunting, are not kosher, as the animal in this way are not killed in the correct manner. If the animal on the other hand is bred in captivity or were captured alive, it may be slaughtered in the correct way and is thus kosher (provided of course that it is a permitted animals)

● Fallen stock is not kosher

● Shellfish (shrimp, lobster, crab, oysters, mussels, squid and others.), Molluscs, caviar (eggs from sturgeon or lumpfish) and snails are not allowed to be eaten

● Some cheeses produced with animal rennet. Meat and birds may never be mixed with milk products, neither in the meal itself nor during the meal. After eating milk some Jews (yes, we debate that too…) say 1 hour has to pass before one can eat meat and 6 hours if it is the other way around

Hence a menu of camel steaks garnished with lobster tails (another version of the Australian Surf & Turf) is not to be found in a kosher kitchen.

Halacha (Jewish law) prohibits the mixture of meat and milk. In The Second Book of Moses 23,19 it is said that “boiling a (kid) goat in its mother’s milk” is prohibited. That is often how we explain this rule to our kids – and to people, who are not familiar with the kosher terms.

A kosher kitchen is often organized with two sets of plates, cutlery, pot and pans, dish brush, dishtowel, chopping boards etc. (one set for meat, one for milk dishes) and neutral like glass. Some families divide their kitchen into a meat – and a milk area – with its own sink, dishwasher etc.

There is a stricter regime during Pesach (Passover) where many Jews have another set of plates etc. exclusively for that occasion.

Is it difficult to live kosher if you weren’t brought up that way? Well, it depends.

Many Jews live kosher at home, but not when they are guests outside their homes, at restaurants, while traveling etc. You have probably already met Jews who don’t eat pork, but love a good steak with sauce béarnaise (lots of butter….) and who will crave seafood the minute they have the opportunity to eat just that.

I guess you can say, that any change in your daily life that requires a major change in your household routines – like if a member is diagnosed with diabetes or is very allergic – is a challenge. But you adjust.

To me the kosher lifestyle represent a conscious way of cooking, eating and socializing. You could also argue, that the kosher way of living is both an old fashioned yet modern choice.

It can create a focus on health and hygiene and it can point to dilemmas when it comes to a more sustainable environment and animal welfare. Many people – Jews or Non-Jews – ultimately choose to become vegetarian or vegan.

If you would like to see the list of what is considered kosher among orthodox Jews in Denmark – here is the list (in Danish). LINK TIL LISTE

If you are interested in reading more about the purpose of Kashrut, here is a possibility.

While shopping (if you have a Smart phone) it can be a help for you to locate the kosher product with an app eg. the “Is it kosher?” app. Another alternative is to look for the symbols. See the kosher list here. 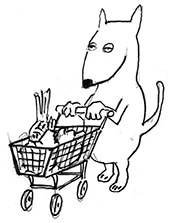